The Elementals faction is the oldest of the higher intelligent lifeforms on the planet, and despite their humanoid statue, they are but animated durossein shells. Powered by a heart stone behind their chest, they are bound to an elemental energy and channel its tremendous power through their stigma or weapons. They tend to live in places which have higher concentrations of their awakened energy, but they are not constrained to those places. 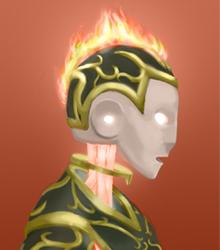 Pyrokins first originated among the smouldering rock formations in the vicinity of volcanoes. Their form of birth and their later instinctive ability to harness fire energy has enabled them to embed fire and lava into their weapons and armor as well as channel the raw power through their bodies in order to unleash devastating blasts against unprepared threats. Locked into a perpetual conflict with their natural enemies, the disease using Virnox, the Pyrokin produce protectors to ensure that the source of their life energy remains strong.

The Primals are a peculiar faction because they consist of seemingly natural creatures, yet are much more intelligent and advanced than their more bestial counterparts. They integrate well with other creatures and plants and have the ability to channel the ferocious primal energies through their stigma or weapons. Even though their customs are more brutish than the Elementals, the aptitude of these beings should never be underestimated. 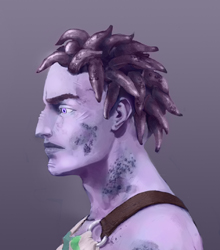 The Virnox are a bizarre race. Knowing only that they spawn within toxic cesspools, their origin is shrouded in mystery. Symbiotic in nature, their neonate form needs to find a human male host in order to reach maturity. The ensuing bonding process physically malforms their unwilling partner. Combining disease energy with their doomed host allows them to produce a wide variety of dreadful blights. While all Primals fight the Elementals for balance, the Virnox have a more hostile attitude towards the Pyrokins as their flames destroy reproductive environments.